Excerpt: Not Another New Year’s 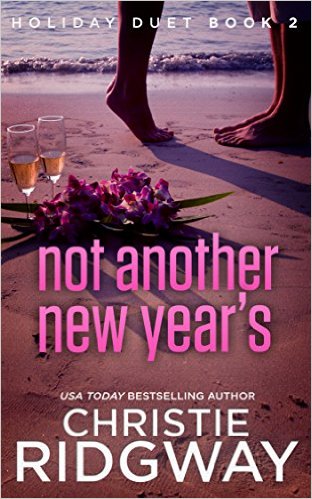 Hannah Davis stood on the wide sidewalk outside San Diego Airport’s Baggage Claim and tried convincing herself she hadn’t just lost everything. After all, she had her health (which was actually saying quite a lot for a second grade teacher during flu season) and she had relative youth, though she was on the downhill slide to thirty.

But she no longer had her luggage and she didn’t have her purse. Meaning she had no clothes, no shoes, no undies, no toiletries, no ID, no credit card, not even a ChapStick. She glanced down at her scraped and nicked palms and tested the flex of her bruised knees. Maybe running after the person she’d seen hurrying out the sliding doors pushing her purloined baggage cart—purse perched on top—hadn’t been such a smart idea. But she’d only turned away for a moment to offer aid to a “mama”-wailing toddler, and when she’d turned back it was to see the backside of a stranger shoving her stuff outside.

In her immediate pursuit, she’d tripped in her new black pumps, losing precious minutes. By the time she’d gotten upright again, the stranger and all her things had disappeared.

Airport security had been as helpful as any busy law enforcement entity would be as night fell on New Year’s Eve. They’d taken her statement and said they’d be in touch. Given that her cell phone had been stolen along with everything else, and since she didn’t know where to say she’d be staying because she had no way to pay for accommodations, she’d told them one of the two addresses on nearby Coronado Island that she’d committed to memory.

Hannah’s head jerked around to meet the brown-eyed gaze of a young Marine dressed in sand-colored desert camouflage. His companion was garbed the same and had a set of freckles stretched across his baby face.

“Ma’am, we saw you fall a while back. Are you all right?”

Hannah’s heart squeezed. She’d seen dozens of members of the military in her travels through airports that day. Young men and women sacrificing for their country. A trio had been in line at the Starbucks in Sacramento. The man in front of her had paid for their macchiatos.

When a dozen had debarked the plane at the gate next to hers, spontaneous applause broke out all over the concourse. In the airport bookstore a motherly looking woman had given a young soldier a spontaneous hug.

Obviously, to most people the sight of them spurred patriotism and pride.

Her heart squeezing hard once again, Hannah looked at the pair beside her and could only wonder if either one of them was a bigamist.

“I’m fine,” she said, clearing the bitterness from her throat. “Thanks.”

For the fifth time she considered running back inside to the bank of pay phones by the escalator.

One collect call and her overprotective parents would breathe a sigh of relief that they could make the arrangements to straightaway return her to the family fold and their small, Northern California farm town.

She could be home before this year ended.

Only to ring in the next without any relief from all the unanswered questions, the sticky pity, the hot-cheeked shame she’d been living with during the last one.

Returning home would also mean returning without the vacation—the adventure!—she’d claimed she wanted to everyone who would listen. And without achieving the real desire that was in her heart.

That thought was enough to turn her toward the nearby taxi stand. She couldn’t go back without seeing these ten days through and learning just how her right choices had turned out to be so very, very wrong.

Without finding out what was wrong with her.

So she’d stick it out without resorting to any kind of bailout from Mom and Dad.

On the slick vinyl seat of a cab that smelled like pine air freshener and Armor All, Hannah sat back, straightening the legs of her new black jeans, a necessary purchase after the I’ve-been-dumped diet caused her to drop fifteen pounds in the last eight months. Then she surreptitiously fished beneath her pressed overshirt and satiny camisole to locate the three twenties she’d slipped into the left cup of the built-in shelf bra (which was roomy anyway, thanks to the weight loss, a sure sign that God was a man).

Finding the folded bills, Hannah blessed the travel savvy of Paula, the woman who taught third grade in the room beside hers at Harold Mott Elementary School. During the weekly meeting of their Potluck Club, she’d shared some of her expertise.

Spare cash in the bra. Check.

Memorize the address of your destination. Check.

Never leave your purse anywhere but slung across your chest. Ooops.