Excerpt: The Thrill of It All 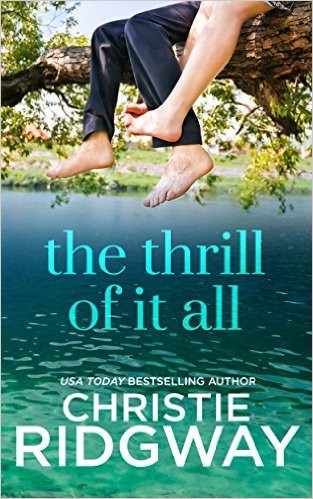 There was more dazzle in the Las Vegas ballroom than a convention of Crest White Strippers on a glitter factory tour. Ultraviolet smiles snapped on and off like flashbulbs, their beams catching in the diamond-drop chandeliers overhead and in the facets of the cut-crystal stemware on the snowy tablecloths. Celine’s show at Caesar’s Palace was dark that night, but Celine herself was still at work, her silver sequins winking as she slinked forward to double-airkiss the cheeks of the Home Shopping Network’s CEO. Nearby, the canary-yellow jewel in J-Lo’s cocktail ring—a simulated “Jem” from her own signature line—caught the light and bounced off the glasses of the QVC executive sitting beside her.

At the table reserved for GetTV—front and center, as GetTV had received the most nominations for the awards that honored the best in the shopping network and infomercial industry—no high-powered executive or high-salaried celebrity could distract Felicity Charm from the single most important figure in the room. Elegant, serene, and standing alone on a satin-skirted table atop the stage, the fourteen-inch statuette, nicknamed the “Joanie,” commanded all Felicity’s attention.

Her hand curled, as if already wrapping around the trophy’s slick surface. The Joanie’s gleaming fourteen-karat finish would pick up the matching threads in the white chiffon of her simple strapless evening dress, Felicity thought. Perfect. The crowning touch to the image she’d been shaping and polishing for the past sixteen years.

A silky southern accent snaked through the buzz of the crowd. “Don’t you feel like a big ol’ fake?”

“No.” Felicity’s gaze whipped left, clashing with the cool, calculating one of Andrea Rice, the co-worker seated beside her at the banquet table. To cover for her knee-jerk outburst, Felicity tempered her voice and worked up a half-smile. “I mean, uh… what?”

Andrea shrugged. “Oh, it’s just me and my jitters. About now I start thinkin’ how undeservin’ I am or I start worryin’ about givin’ my acceptance speech while somethin’ leafy green and the size of south Texas is stuck between my teeth.”

Felicity hung on to her noncommittal smile. Not only wouldn’t she let that four-letter word “fake” into her head, but she’d start cashiering at Kmart before she imagined herself standing up in front of three thousand industry professionals—not to mention the TV viewers watching the awards ceremony live at home—with a Popeye-worthy portion of spinach wedged in the seam of her two front incisors.

Andrea waved a hand. “I can’t imagine why I’m givin’ it a li’l ol’ thought. This might be my seventh nomination for Host of the Year and the only time you’ve been mentioned, but I’m just sure you’ll win.”

It wasn’t lost on Felicity that the moment demanded she reciprocate, but it was all she could do to respond with another smile. Her stage crew had let her know that in the weeks since Advertising Age magazine had named her “America’s Sweetheart of Sales,” the other woman had been tirelessly campaigning the members of the Electronic Retail Association to vote for anyone but “Felicity Full-of-Herself,” as Andrea liked to call her behind her back.

The chandeliers briefly flickered, signaling that the commercial break was almost over and sending Felicity’s pulse rate soaring. As live close-ups of herself and the four other Host of the Year nominees popped onto the huge screens hanging over the stage, the man on her right, her producer, Drew Hartnett, leaned down to murmur into her ear.

She smiled for the umpteenth time, as anxious to hide her nerves from him as she was to conceal them from everyone else. Drew always looked like her ideal man—but tonight! He wore a tuxedo like other men wore jeans and sweatsocks and his cultured bearing only made her more determined that any cracks in her poised, self-assured shell wouldn’t show.

Drew deserved no less. They’d worked together the past two years with the tacit agreement that they were too busy with the transformation of GetTV to allow a romantic relationship to steal their focus, but with this year’s success, she knew the time was ripe for that to change.

Winning the Joanie would prove Felicity good enough to win Drew, too.

The chandeliers dimmed, and then the emcee bounded back onto the stage. During the next few minutes, while the cameras retained live, tight shots on the others, the fifth screen displayed a canned segment about each nominee, complete with gushing voice-over and clips from their respective shows.

Felicity sat frozen, trying to look bright-eyed and attentive through the others’ spotlights. Then it was her turn.

“In the past year at GetTV, Felicity Charm has turned our industry on its ear. Not content with the demographic targeted by QVC, HSN, Worldwide Shopping, and the infomercial retailers, Felicity speaks to—and more importantly sells to—her generation. InStyle magazine calls her the ‘It Girl of Electronic Retail.’

“Maybe it’s the products she presents—many that she selects herself—or the celebrities she convinces to appear with her, from Kristen Stewart demonstrating moves from her ‘Toned By Twilight’ series of exercise DVDs to the hip hop group the Black Eyed Peas offering up their specially spiced jarred vegetables. Whatever the reason, there’s an undeniable magic about Felicity that has twenty-and thirty-somethings tuning in.”

Then they ran a clip from a recent show. Felicity saw herself admiring a more run-of-the-mill product—a set of 250-threadcount Egyptian cotton bedwear—“Boyfriends don’t leave beds dressed in these sheets!”—and then she suggested to the at-home audience that the product also made great gifts for older relatives. Her Aunt Vi’s book group—Classic Ladies Read the Classics—used them on every bed in their first and second homes, she told the audience, and her Uncle Billy’s golf foursome swore sleeping on the smooth cotton had taken an average of six strokes off their golf score.

Her segment came to an end, there was a gratifying round of applause, and then it was time to announce the Host of the Year winner. Felicity’s heart pumped fast and hard as a six-foot showgirl sashayed the envelope out to the emcee.

Let me finally declare the reinvention of Felicity Charm complete.

One of Andrea’s claw-tipped hands grabbed Felicity’s and gave it a vicious squeeze. “Good luck,” the other woman said.

“Good luck to you, too,” Felicity replied, though she’d never believed in such a thing. To get what you wanted in life required smart choices and hard work.

The emcee dragged out the unsealing of the envelope. Finally he looked up. “And the Joanie goes to . . .”

Felicity tried breathing, but the air in the room had evaporated. A high note whined in her ears and she wondered why the emcee was moving his mouth without any sound coming out. She leaned forward. What? Who?

The people around her erupted into movement. She still couldn’t hear a thing over that high-pitched buzz, but heads were turning toward her and Drew’s hands were lifting her out of her chair. Then, finally, the thunderous, glorious sound of applause burst into her head.

She’d won! As she walked toward the stage, Felicity’s gaze lifted to the golden, gleaming Joanie in the emcee’s hand.

That’s mine, she thought. No, that’s me. Gleaming, golden, polished. Something special. Something to be proud of. Her shoulders squared and she ascended the steps and headed toward the podium, feeling as if she grew an inch with each foot of stage she crossed.

The emcee held out the statuette and she reached for it with both hands. As she looked out at the audience, all ten fingers tightened on its cool, solid weight.

“I’m thrilled,” she said into the microphone.

Nobody can take this away from me.

“There are so many people to thank. First and foremost, our wonderful viewers, who have so generously taken me into their hearts.”

And for that, I pledge never to disappoint them.

“The Hartnett family, who own GetTV, for giving me the opportunity. Drew Hartnett, in particular, for being such an innovative producer.”

As well as the man I now feel worthy of marrying.

“Then there’s my teachers and professors, in particular those in the Communications Department at USC.”

Though I won’t forget Mrs. Myers, the principal at Desert Elementary, who taught me what it is to feel shame.

The one I can now, finally, turn my back on. After all these years, the Joanie proved that she was no longer one of them. Like them.

“Thank you again, thank you all.”

Applause thundered as she followed the showgirl away from the podium. In a daze of happiness back-stage, she almost waved off the set of car keys the emcee rushed after her with. So intent on the Joanie, she’d forgotten the prize included a brand-new Thunderbird convertible.

Then, stepping over cables and stepping around the awards show crew, she spied a pay phone in a secluded corner. On impulse she headed for it, deciding to call the Charms then and there. Joanie in hand, she would make a clean break with them.

Aunt Vi answered on the first ring. “Hello?” Despite the way she described her aunt to her viewers, it was no trouble at all for Felicity to picture the real Aunt Vi, wrapped in her usual ancient, snagged housecoat. No trouble at all to picture her with one of her seventeen or so cats on her lap. The National Enquirer would be open on the rickety kitchen table and the TV would be droning out one of the two stations that the cable-challenged citizens of the community of Half Palm managed to catch with a wire-hanger-enhanced pair of rabbit ears.

“Oh, wonderful! You got my message.”

Felicity could picture her cousin Ben, too, just one of the many no-good, no-account, never-make-a-thing-of-themselves Charms.

“I called because we need your help, Felicity. He’s disappeared.”

Well, he wasn’t the only one to have gone missing, Felicity thought, stifling a sudden urge to giggle. Because already, less than three sentences into the conversation with Aunt Vi—poof!—the gleaming, golden Felicity had vanished. Gone. In her place stood the no-good, no-account, mosquito-bitten desert ratette she’d been told she was when she was eleven years old, and who she’d been struggling to remake since.

Home? No, no! Half Palm wasn’t home. Clutching the trophy tightly, Felicity struggled to remind herself of that. She wasn’t anything like the others in her family, either; hadn’t winning the Joanie proved that?

“Felicity, I’m worried. We need you here right away.”

No. Next on her agenda was Drew. He’d insisted she take the next couple of weeks off and she wanted to use them to start working on that personal relationship with him.

Her heart thumped heavily. But she couldn’t work on a personal relationship, she realized, not with Half Palm and the real Charms still hanging over her head. Not when, with one phone call, they thought to make her part of them again.

Before she could have Drew, she needed to get them out of her life. She needed to make them understand that she didn’t belong in Half Palm and that she wasn’t one of them anymore.