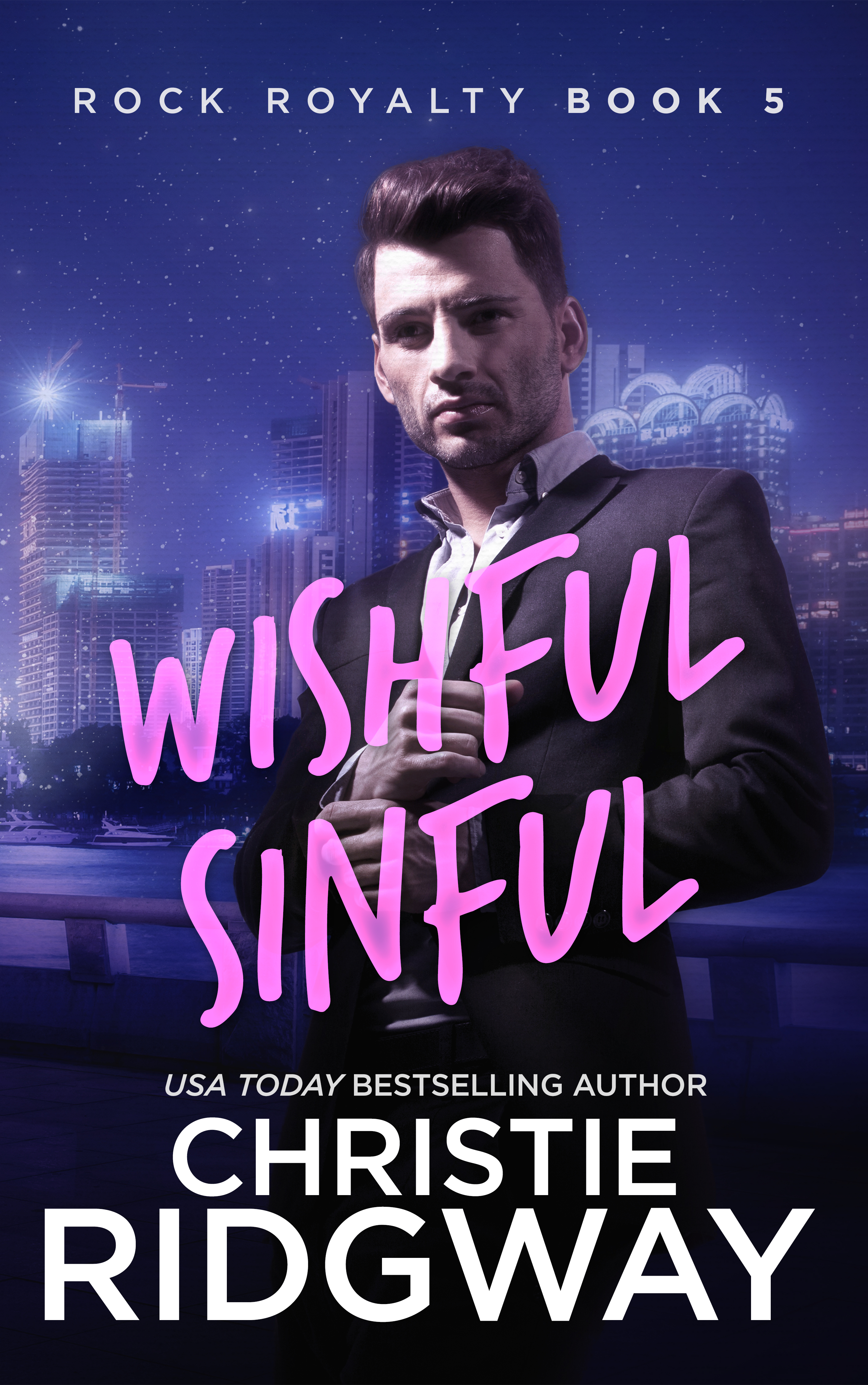 Walsh Hopkins took a swallow of his beer, letting the stress of the long work week slide away. There was more to celebrate beside it being TGIF—today his tribe was also reveling in the complete recovery of one of their own. They’d gathered at Payne Colson’s place because this afternoon the man had received a clean bill of health. The doc proclaimed him completely recovered from his race car crash weeks before.

Payne looked more than pleased with himself—and beyond pleased with the brunette at his side. He’d fallen hard for his Rose.

Still, Walsh had to give a silent shake to his head. This party hadn’t gone without a crisis. Payne’s older brother, Ren, had faced off with the younger man over his reckless ways and they’d nearly exchanged blows.

Years ago, Rolling Stone magazine had dubbed the nine collective children of the most famous band in the world “Rock Royalty,” but if you asked Walsh, some of the princes and princesses could more aptly be described as… “A bunch of drama queens,” he muttered.

Brody Maddox, whose father, “Mad Dog” Maddox, was the lead singer of their fathers’ legendary group, looked over, dark brows raised over his blue eyes. “What?”

Walsh gestured at the crowd in the living room with his bottle of micro-brew. “The lot of you. Fucking drama queens.”

“A man who leads with his intellect, not his dick.” He’d learned the consequences of doing the opposite living at the Laurel Canyon compound where the Velvet Lemons had wallowed in hedonism, basically ignoring the children they’d begotten.

Before Brody could respond, the sound of the front door crashing against the wall seized their attention.

“What the—” Brody began, but Walsh didn’t hear any more.

The earth seemed to actually move as he stared at the woman who marched into the living room. Her straight, dark gold hair he’d recognize anywhere, along with long, thick bangs that met the top frame of the oversized glasses that dominated her small face. But the rest of her…

His efficient assistant for the past two years always dressed in suits. Boxy jackets that matched below-the-knee skirts or sober, sternly pressed slacks. They were colored gray or clay or black, shades that were as no-nonsense as Honey Brooks herself. Now, though, she was dressed in colorful spandex: leggings that were splashes of bright pastels wrapped around shapely calves and toned thighs and that lovingly cupped a high, round ass he hadn’t suspected existed beneath her businesswear. His gaze moved upward where he was surprised again by the sculpted muscles of her arms revealed by the clinging hoodie that plastered her body, showing off a slender waist and narrow ribcage.

The change of wardrobe disoriented him. He figured she was here for her boss and that he should say something to garner her attention, but the floor continued to pitch like the deck of a ship on high seas. Pressing the heel of his hand to his temple did nothing to alleviate the odd vertigo. His tie had been stuffed into his jacket pocket an hour ago, but now he flipped open the shirt button at his throat, hoping that would allow fresh oxygen to reach his lungs.

Payne’s Rose waved, catching Honey’s notice and allowing Walsh another minute to gather his cool that had gone weirdly AWOL.

“Hey, can I get you something to eat or drink?” Rose asked the new arrival on a smile.

Honey ignored the polite request. “Where is he?” she demanded.

Shit, Walsh thought as the ground once again lurched beneath his feet. She was really pissed.

“Pfft,” Honey said, dismissing that name with a flick of her delicate fingers. “Walsh.”

There was nothing to do but step up to confront her wrath now. Composing his expression into neutral lines, he passed off his beer to Brody then moved forward, his movements smooth. Casual. “Are you looking for me?”

She whirled in his direction. What he could see of her face was flushed and she was breathing hard, her chest heaving so that he couldn’t help but notice the slice of low-cut, hot pink top exposed by the hoodie’s half-done zipper.

Honey Brooks wore hot pink? The thought made his head spin again …or maybe it was the glimpse of the tops of her breasts—breasts he’d never allowed himself to imagine when she was sitting primly at her desk or in the chair opposite his.

Shoving his hands in his pants pockets, he trained his gaze on her mutinous face. “Is there a problem?” he asked, his tone deliberately calm.

Honey practically leaped forward. Her clean, soapy scent reached him first, that fresh fragrance that for two years he’d refused to react to, no matter how often he caught himself staring at his computer screen wondering if she used a bar or if it was liquid she squeezed onto a big sponge that she then stroked down her slender neck and over her breasts and between her thighs. Long minutes would be lost while he imagined himself watching her slide bubbles all over her wet skin.

Now a sheet of paper was rattled in front of his face, bringing him back to the present and making him blink. “Not if you’ll accept this,” Honey said, venom in her voice.

He could guess what it said. She’d been in a snit ever since he’d explained he needed her presence at his side during an upcoming business trip. Really, her stubborn refusal to go along was unacceptable.

To make that point, he pulled his hands from his pockets, plucked the sheet from her grasp, and tore the stupid thing in half, letting the pieces flutter to the ground.

Honey’s gaze dropped down, then lifted back up, her expression registering outrage. “That’s my formal resignation letter. I just typed that up since you said ‘Not happening’ when I texted you the news earlier today.”

Her full mouth looked as flushed as her face and he had to glance away because it had always held an inconvenient fascination for him too. “You now know my response is the same to your ‘formal’ resignation letter as well.”

Honey quivered. “Did you read it?”

“If you can’t see what I did, then maybe you need to get new glasses.” Walsh brushed a piece of non-existent lint from his lapel.

Her jaw dropped and her eyes widened. Then she snatched those too-big lenses from her face and threw them to the floor where she mashed them with the sole of a sneaker-clad foot. Her gaze snapped back to him and she fisted her bangs, holding them off her face. “I can see just fine!”

She had wide, dark blue eyes and her glare could melt steel, but it wasn’t going to bend his will. “Then I’ll expect you in the office at the usual time Monday morning,” Walsh said, and without another word turned to stroll out the slider leading to the back yard, shutting the glass door behind him.

He was trying to smooth out his mood when he heard the sound of someone coming outside to join him. His hands fisted, and he shoved them in his pockets again to hide his reaction. If Honey thought—

Walsh relaxed a little and glanced over his shoulder to see Brody approaching. “Did she leave?”

“I think we can accurately say she stormed off.”

Frowning, Walsh considered that. It was all so strange. For two years she’d been the epitome of cooperation and competence. They worked well together, their minds seeming to mesh, often without any speech necessary. But then…

“I’ve got this long weekend to Mexico coming up,” he said.

“Good.” Brody came to stand shoulder-to-shoulder with him, the both of them looking out over Payne’s pool. “Your workaholic ways are sucking the humanity out of you.”

Walsh turned his head, irritated by the jab. “Screw you. And if we’re going to point out character flaws—”

Clamping his mouth shut, Walsh studied the other man. Brody’s twin, Bing, with whom he ran a successful construction company, had shared that his brother had developed a disturbing tendency to go off on benders. He’d be gone for days at a time and return green at the gills and looking as if he’d crawled through dirty gutters to get home.

Brody had always been considered the good twin, but now he seemed determined to drag his reputation—not to mention himself—through the stickiest mud.

“Look,” Walsh began. He wasn’t a touchy-feely kind of man, God knew, but since Ren and his fiancée, the Rock Royalty princess Cilla Maddox, had coupled up, they’d worked at strengthening ties between the Lemon kids. Maybe he should do his part now. “If there’s something you want to talk about…”

“Who knew your admin had a body that hot?”

Heat shot up Walsh’s spine. “What the hell?”

Brody appeared unperturbed. “You can’t tell me you didn’t notice.”

“She works for me.” He cleared his throat to disperse the annoyance edging his voice. “I care about how she does her job, not how she looks.”

Walsh refused to let his temper kindle again. His emotions never got the best of him. It was the secret to his success in business and in life in general. The minute a man started giving in to emotion, he lost the control he had of himself and his world.

Destructive things followed from there.

“So tell me about this vacation you’ve got planned.”

Brody groaned. “Only you would manage to make a trip to the tropics about business.”

“I didn’t plan it,” Walsh snapped back. He took in a calming breath. “But we’ve put a consortium together and the idea came up that we should get better acquainted on neutral ground. You know, make connections outside of a boardroom.” He had his own particular target, York Featherstone, whose company manufactured personal military weaponry that could dovetail nicely with the products that Walsh’s own firm developed. York was reputed to be reclusive and hard to get along with, but Walsh thought a partnership might work out well for both of them.

It was his sole purpose for taking time away from the office for a jaunt to Mexico. It was also why he wanted Honey by his side. She could call up pertinent facts and figures on the fly. That she was an excellent judge of character was an added bonus.

“Maybe you’ll get better acquainted with your admin.” Brody’s voice was sly. “Under the influence of sun, sand, and tequila you can make a totally different kind of connection.”

Walsh stared at the other man. “Why do you keep saying shit like that?”

“Alexa brought up the word ‘makeover’ and Cilla seems all for it. If they hear about Mexico, they’ll want to turn your second brain into a bikini-clad bombshell.”

Alarm bells were ringing in Walsh’s head. For two years he’d steadfastly managed to ignore everything about Honey besides her business skills

Except that scent, a voice inside him said. And her mouth.

He ignored the evil whisper. Every instinct he had told him that becoming aware of her as a woman would take the two of them into territory that not only would destroy their professional relationship, but could wreak other kinds of damage.

He should know, he was an expert at blowing things up.

So yeah, he was going to continue thinking with his big head, not the little one.

“Makeover,” he muttered. “No way. Nothing better change.” It wasn’t panic that caused the uptick in his heart rate. It was determination.