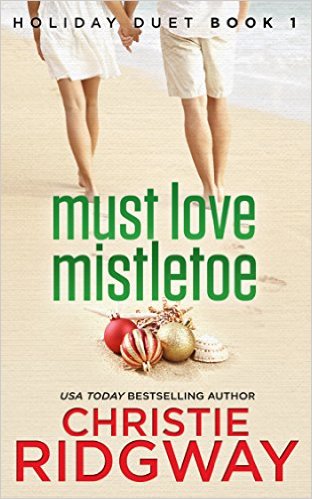 Fingers hovering at the switches by the front door, Bailey Sullivan glanced over her shoulder at the interior of The Perfect Christmas and wondered what would happen if she set Santa’s beard on fire.

But the happy, arsonistic notion died a swift death. That wasn’t the answer to her problems. Surely the manufacturers of the dozens—hundreds!—of Santas in her family’s shop would have treated their respective fabric, resin, wood, or cotton-floss facial hair with flame retardant.

And anyway, a visit from the Coronado, California, fire department would only make bigger the mess she’d been forced back home to put to rights. With a resigned shrug, she doused the lights and cut off Marilyn mid–“Santa Baby.” For the first time in ten hours Bailey’s ears experienced a grateful reprieve from holiday assault. Until the rattle of the jingle bells as she exited the front door, that is. But that noise was mercifully brief, and after she locked the door behind her, she closed her eyes and leaned her forehead against the cold plate glass.

One day down, twenty-four to go.

She sucked in a deep breath of night air, cooled and salted by the Pacific Ocean just a block away, and let it clear out the lingering notes of cinnamon-and-clove potpourri that was The Perfect Christmas’s signature scent. Customers Internet-ordered the stuff from all over the world, claiming it captured their very best holiday memories.

As far as Bailey was concerned, captured was the operative world. From the day she could be trusted to unwrap merchandise to the day she could run the cash register with her eyes closed, she’d been a prisoner in the two-story Victorian that housed the almost sixty-year-old family business. She’d managed to escape for the ten years between eighteen and twenty-eight, but now, just as surely as Hermie’s dental skills came in handy, just as inevitable as the foggy night that required Rudolph’s very shiny nose, she was once again held hostage.

Until December 25. Then she was outta here and back to Los Angeles and her happy holidays-less life.

Giving an emphatic nod, she almost lost the green-and-white striped hat jammed over her blond hair. With a grimace, she yanked the thing off and stuffed it in the front pocket of her red cotton and fake-fur-trimmed apron. This morning she’d driven straight from her condo in L.A. to the shop and found them hanging on their customary hook in the back office. Along with her customary nametag—her name between two peppermint sticks—that read:

Which made her think about the next item on her today’s to-do list. Heading the eleven blocks to her childhood home and confronting her mother. Bailey rested her head another moment against the cold glass, then straightened. There was nothing to it but to do it. And there was no one else to do it but Bailey.

She turned, pointing herself in the direction of her car that earlier she’d moved to the end of the block beneath one of the streetlights. Her gaze lifted to the holiday decorations suspended from the metal poles along the avenue. When she was a kid, they’d been tired-looking tinseled bells and dusty angels, but in the new millennium they were bright polyester flags depicting holiday icons like nutcrackers and snowmen. Over her silver Passat hung one stamped with a multicolored tree ornament, and beside her car was a little man in a uniform holding a ticket book.

“No!” she called out, rushing down the walkway and along the sidewalk. She wasn’t going to get a citation. She couldn’t. Wasn’t being back in the shop enough? Wasn’t it already unfair that she’d be spending the night in her old twin-sized canopy bed, sleeping with her Nirvana posters instead of on her Posturepedic mattress and with her framed Picasso prints? Her day wasn’t supposed to get any worse.